Grade 3: Oil Pastel Moonlit Pumpkins and a dash of mumble

Yesterday, November 14, my final group of third graders finished their moonlit pumpkins. We started this project last month. Unfortunately, my Thursday/Friday classes get hit pretty hard here in NJ missing a TON of art between the teacher's convention and Thanksgiving. It's tough. If I could, I'd move the convention to almost any month but November (and December and April) because it's two whole days away from kids I will inevitably not see a few weeks later. Well, we finished today...I've had the rest on display in the hallway for weeks now.
Moving on, a staple fall project of mine has been pumpkins. In the past I have done chalk pastel pumpkins like these back in 2011. I saw a project on Pinterest of these pretty moonlit pumpkins and thought I'd switch things up. 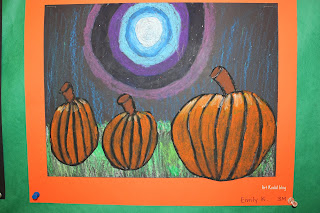 We talked extensively about moonlit skies and how the moon tints the sky circling the moon. My 3rd graders used oil pastel on black paper to create the sky and then worked on indicating the direction of the grass growth using oil pastels as well.
On to the pumpkins, the kids knew right away that the tops of the pumpkins would be lighter since the moon was shining right on them.
I really like how these pumpkins turned out and the kids were happy with this project. Next year, I will go back to chalk pastel though. 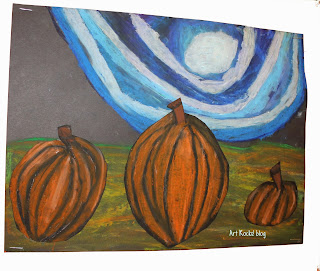 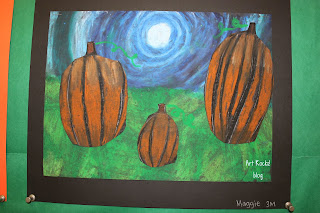