We are revisiting creating tints in our art with this lantern drawing project for Chinese New Year. Although these lanterns are different from traditional Chinese lanterns, we discussed Chinese lanterns and how beautiful floating lights are.
Day 1 of this project was all discussion, drawing and oil pastels
Day 2 will be finishing up with oil pastels and then painting the backgrounds.
credit: Art projects for Kids 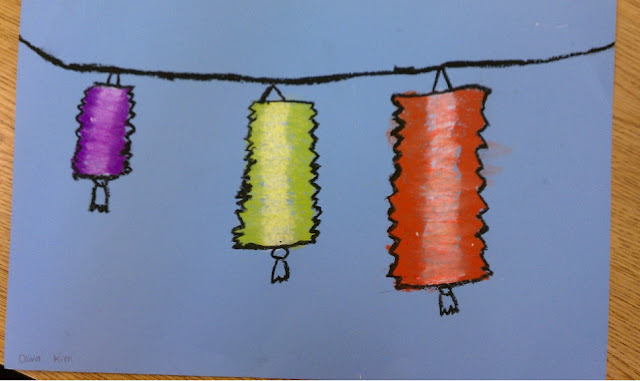 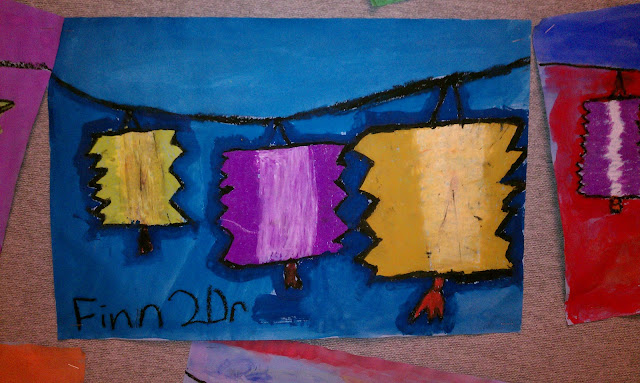 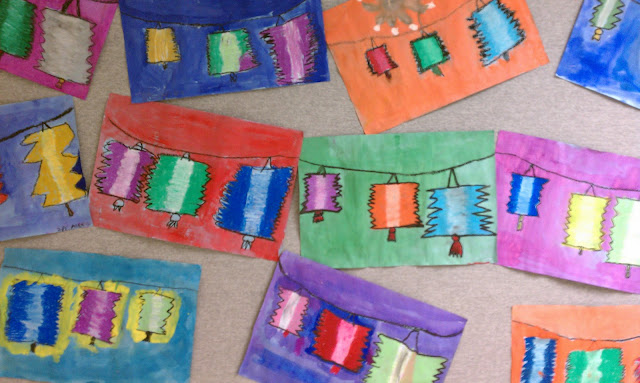 Rat was the first animal in the Chinese zodiac cycle. It is usually considered aggressive, ambitious, suspicious, power-hungry, honest, generous, quick to anger and prone to spend freely. Those born under the sign of Rat are imaginative, charming, and truly generous to the one they love. However, they have a tendency to be hot-tempered and overly critical. They are usually suitable for sales work or work as a writer, critic, or publicist. Rats will get well along with Dragons and Monkeys, however should avoid Horses.
Ox - Born in 1913, 1925, 1937, 1949, 1961, 1973, 1985, 1997, 2009

Ox is a symbol of powerful individuals with unyielding and stubborn personalities. Those born under the sign are natural born leaders who typically succeed when given the chance and will also make outstanding parents. They are upright, inspiring, easy-going and conservative. The Ox would be successful as a skilled surgeon, general, or hairdresser. Ox gets along with Snakes and Roosters but not sheep.
Tiger - Born in 1914, 1926, 1938, 1950, 1962, 1974, 1986, 1998, 2010

As the fighting animal, those born under tiger's sign are sensitive, aggressive, unpredictable, charming, emotional, courageous and capable of great love. Often risking themselves, they have a carefree life. Tigers usually will be outstanding as a boss, explorer, racecar driver, or matador. A happy marriage can take place with a Horse or a Dog but never a Monkey.
Rabbit - Born in 1915, 1927, 1939, 1951, 1963, 1975, 1987, 1999, 2011

Those born under this sign are affectionate, talented, obliging, always pleasant, valuing security and tranquility. They have a tendency to get too sentimental and superficial and to avoid conflict and emotional involvement. Being cautious and conservative, they usually take no risk and are successful in business. They would also make a good lawyer, diplomat, or actor. Their best life partners are Sheep or Pigs instead of Roosters.
Dragon - Born in 1916, 1928, 1940, 1952, 1964, 1976, 1988, 2000, 2012

Those born under this sign are usually considered clever, passionate, determined, romantic, intense, rich in wisdom and charm, but vain. Women born under Snake are often beautiful. Snakes will be strongly guided by their intuition. They certainly will win a lot of money, but have to avoid procrastination and stingy attitude towards money. The Snake would be most content as a teacher, philosopher, writer, psychiatrist, or fortune teller. Marriage with a Rooster or Ox not a Pig will be best.
Horse - Born in 1918, 1930, 1942, 1954,1966, 1978, 1990, 2002, 2014

They are hardworking, intelligent and friendly, cheerful and popular, but impatient. Usually they consider themselves superior to others. They have a strong streak of selfishness and sharp cunning and should guard against being egotistical. Adventurer, scientist, poet, or politician will be suitable occupations for them. Horses get well along with Tigers and Dogs instead of Rats.
Sheep - Born in 1919, 1931, 1943, 1955, 1967, 1979, 1991, 2003, 2015

The sign suggests a person who is creative, artistic, passionate, elegant, warmhearted, honest, charming but pessimistic, timid, disorganized and vulnerable. Too dependent on material comforts, they are easy to complain and do not respond well to pressure, but will find their own natural solution to a problem when given space. Best occupation for a Sheep is an actor or a gardener. They are compatible with Rabbits or Pigs in marriage, but not Ox.
Monkey - Born in 1920, 1932, 1944, 1956, 1968, 1980, 1992, 2004, 2016

Monkeys are intelligent, inventive, clever, entertaining but also dangerous and easily discouraged. Because of their extraordinary nature and magnetic personality, they are always well liked and make close friends. However, they can't be trusted. They should guard against being an opportunist and distrusting other people. The sign suggests success in any field they try. The best matches are Dragons or Rats while the worst are Tigers.
Rooster - Born in 1921, 1933, 1945, 1957, 1969, 1981, 1993, 2005, 2017

Roosters are courageous, hardworking, shrewd, arrogant, reckless, selfish and eccentric. They are thirsty for knowledge, devoted to work and definite involved in decision-making. They are skilled at what they do and attentive to details. However, they tend to seem boastful to others. Roosters will be happy as a restaurant owner, publicist, soldier or world traveler. The sign promises harmony with Snakes and Ox and trouble with Rabbits.
Dog - Born in 1922, 1934, 1946, 1958, 1970, 1982, 1994, 2006, 2018

Those born under this sign are honest, quiet, intelligent, generous, stubborn, loyal and faithful to those they love. They are introverted listeners, dedicated but also cynical and prone to letting their external anxieties get the better of them. Constant worry, a sharp tongue, and a tendency to be a faultfinder will always plague them. However, they are born to be successful. Dogs will be excellent businessmen, activists, teachers, or secret agents. Tigers and Horses are deemed as best matches, and Dragons need to be handled with care.
Pig - Born in 1923, 1935, 1947, 1959, 1971, 1983, 1995, 2007, 2019

Pigs are honest, reliable, sincere, tolerant, shy, affectionate, kind, impulsive and short tempered. They are splendid companions, intellectuals with a very strong need to set difficult goals and carry them out. In addition they are extraordinarily naive. Their unquenchable thirst for knowledge will facilitate their success whereas their quest for material comfort will frustrate it. Pigs also will sacrifice their lives for good causes. The Pig will be successful in financial affairs, or as an entertainer, or possibly a lawyer. Pigs should be aware of other Pigs and compatible with Sheep and Rabbits.