The 5th graders at TGG and BT are warming my heart. We have started our first official project of the year which is a printmaking.
The kids are coming up with very simple design to carve out of an eraser. They are only 1 week in but already doing an incredible job. I am so impressed at the variety of the designs and the color schemes chosen.
Last year, I taught this lesson at BT and I thought "if I do this lesson again, I wonder if the results will be as great..."
Well, they are!
Many of the designs I would love to see on a huge piece of fabric. Here's a sneak peek at week 1 designs..work in progress 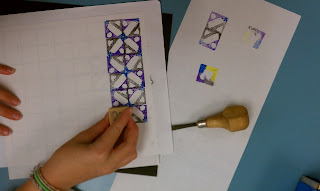 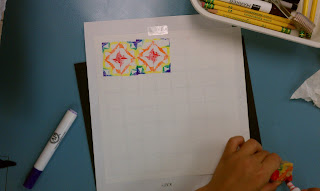 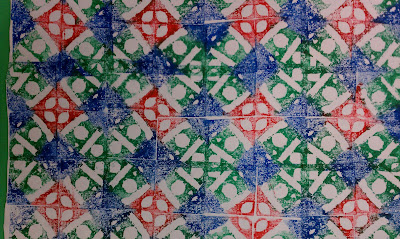 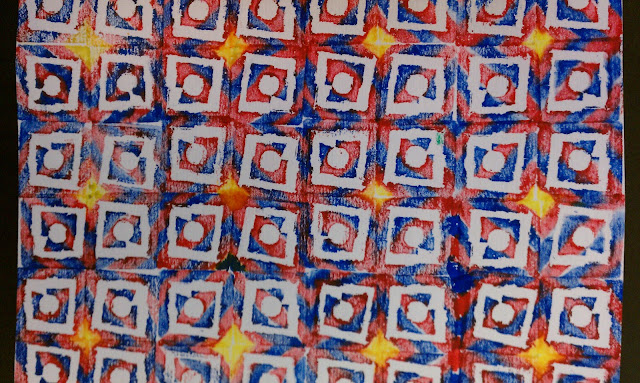 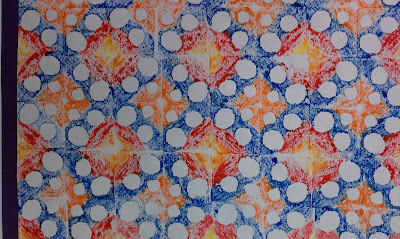 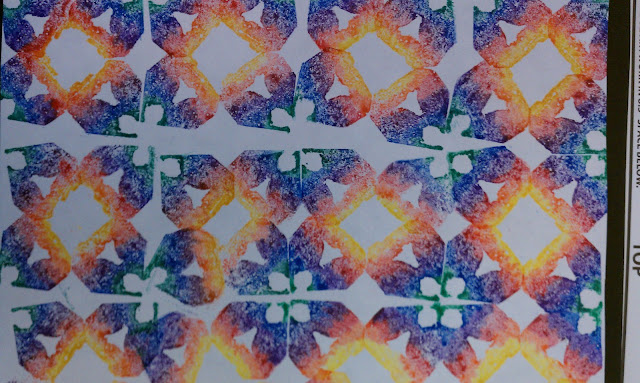 Posted by Joslyn Johnson at 12:16 PM No comments:

I enjoy doodling. It's relaxing, has no expectations and can dig into the total randomness of our being.
I love doodling as an Art Teacher because kids can appreciate the Elements of Design (line, value, color, shape, texture, space, form) and their instantaneous value in making a cool doodle or enhancing one.

So, we are starting a DOODLE WALL. Right now it is located on the inside of the art room door. Students and Staff can doodle on a scrap piece of paper or on a post-it note using black Sharpie or a colored marker.
When done doodling, stick it on the doodle wall.
Once we have enough doodles, we will turn it into a mural to exhibit somewhere.

The Doodle Wall is temporarily housed on the inside of the art room door. Take a peek below 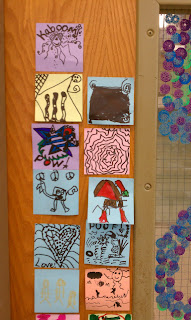 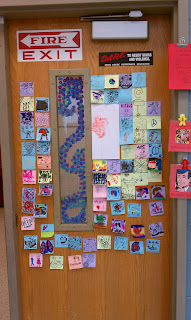 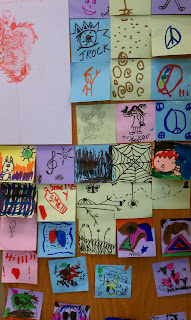 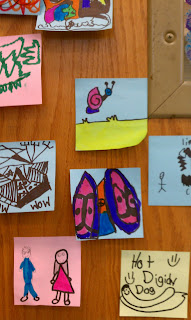 Posted by Joslyn Johnson at 11:49 AM No comments:

I love to doodle. It's amazing some of the random things you can come up with by repeating shapes, creating line patterns inside of a shape and applying the elements and principles of design to a piece of scrap paper.
Check out The Doodle Lab for some cool ideas to get your creativity flowing.With ideas from the Doodle Lab, you will never stare at a blank piece of paper again!

Posted by Joslyn Johnson at 12:25 PM No comments:

Power in Numbers: Pinwheels for Peace

When those pinwheels started spinning, the kids were so delighted.
We talked about the power in numbers as it relates to making a visual statement.
If you were walking by and saw a single pinwheel in the ground, you wouldn't think much of it. If you saw twenty, perhaps you would think there was a birthday party going on. One hundred pinwheels would catch your attention and raise an awareness to the fact that a statement is trying to be made.
I look forward to seeing 1,000+ pinwheels spinning in Hopewell Valley this Wednesday, 9/21/11. We will be apart of over 3.5 million pinwheels spinning worldwide that make individual statements about peace.
Regardless of who made the pinwheels, we all have our own developing or established take on peace. We are all surrounded constantly by negative images and it can be tough to escape them. Talk radio, the news, video games, published imagery, cartoons... tons of negative messages everywhere.
Our children are so innocent and so powerful. We all want them to understand that they can make good choices every day. I want them to realize that they can use their creativity and artistic abilities to speak to the world.  ---> www.pinwheelsforpeace.com
Below are some photos of a few pinwheels created at Bear Tavern and Toll Gate this week. 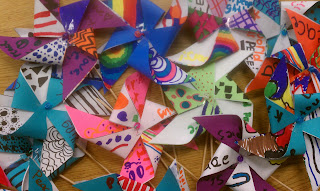 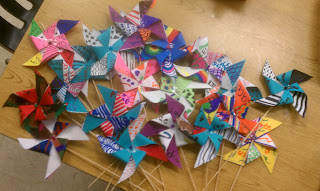 Posted by Joslyn Johnson at 11:17 PM No comments:

Email ThisBlogThis!Share to TwitterShare to FacebookShare to Pinterest
Labels: all grades, Pinwheels for Peace

Here are photos of the tile wall installed in June 2011. Parents had the option of purchasing a tile to donate to the school to be permanently installed. Each tile has your child's art created for the Square 1 Art fundraiser.
You will have the option again this Fall to purchase a tile for permanent installation.
The location of the tile wall is outside of the cafeteria, heading towards the health office. There are roughly 70 tiles donated by grades 1-5.


Posted by Joslyn Johnson at 7:52 PM No comments:

This week in 1st grade we are reading one of my very favorite children's books about making art and the creative process. It's called Ish by Peter H. Reynolds.
Last year, which was my first at BT/TGG (I came from Timberlane), I read Ish to all kids in grades 1-5 to open the discussion on being respectful of each other.
Today, my 1st graders in Mrs. Mc Cann's class had such wonderful ideas to share about being respectful and were very thoughtful in their discussion of the book.
Peter H. Reynolds also wrote a nice story called The Dot that I will share with 1st and 2nd graders later in the year. 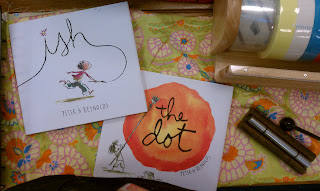 Posted by Joslyn Johnson at 3:31 PM No comments:

Email ThisBlogThis!Share to TwitterShare to FacebookShare to Pinterest
Labels: Books

We are all excitedly awaiting the installation of the plastic bottle cap mural that grades 1-5 worked on in June 2011. The final step before the mural is installed inside the visitors entrance to our school is a 2nd coating of fire retardant spray. The facilities department will spray the mural and then install it sometime in September. In the meantime, here are some facts:
1. The Bear Tavern students, staff and families sent on about 8,000 plastic caps
2. Students sorted the caps by color
3. Students painted the background of the mural and glued each cap
4. Our scene depicts a bear in the wilderness
5. Bottle Caps are not easy to recycle because their plastic differs from the container that it seals.
6. We worked on the mural until the last day of school...the day in which the last cap was placed!
7. Mrs. Johnson reinforced thousands of caps with a screw so that the mural, when installed, is 100% touchable (no caps falling off!)
8. Making this mural was a LOT of fun
9. Bear Tavern kids are awesome
10. We used thousands of caps but not all of them
11. All of the caps are in their natural color..except for the nose of the bear which has acrylic paint on the caps. 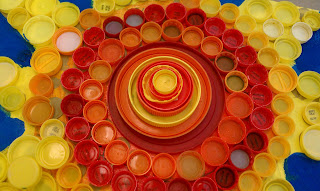 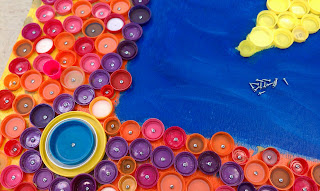 DETAIL PHOTOS OF THE BORDER AND THE SUN

UPDATE!
Our Mural Was Unveiled in mid-September. It is now installed at Bear Tavern inside the Visitor's entrance to the building! 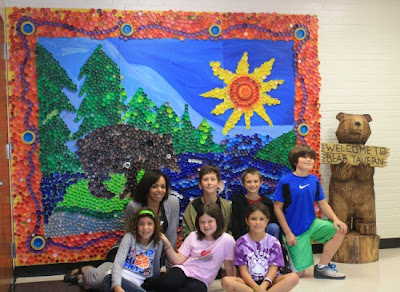 I was quite impressed by the Home Front Exhibit Putting the Pieces Together at Grounds for Sculpture (GFS) which recently debuted. (As many of you may know, I have worked at GFS for over 10 years. For the past 5 I have run an art program called Tots on Tour which is geared towards 3-5 year olds.)
On my way in to teach Tots last month, I was shocked to stumble across the Home Front exhibit which is a collection of art expressions created by homeless adults. http://www.groundsforsculpture.org/education_gallery.html
The power of the exhibit was impressive and sparked a long discussion with a few GFS employees about the benefits of art therapy, etc.
Posted by Joslyn Johnson at 10:03 PM No comments:

A New Year of Art Enrichment

Coming soon to the BT virtual backpack is information and sign-up forms for the 2011-2012 5th grade Art Enrichment program. The program offers 5th grade students the opportunity to have extra instructional time in art once per week. This year, Art Enrichment will be held before school on Tuesday mornings. I will discuss AE with each 5th grade class!
Posted by Joslyn Johnson at 9:53 PM No comments: